In October 2022, grocery giant Kroger announced plans to buy competitor Albertsons for $24.6 billion. Albertsons announced an additional $4 billion dividend payout to investors, which would primarily go to a group of private equity and real estate firms including Cerberus Capital Management, Lubert-Adler Funds, and HPS Investment Partners. The dividend payout has been temporarily halted by a Washington State Supreme Court judge. Washington State Attorney General Bob Ferguson, who sued to halt the dividend, said “paying out $4 billion before regulators can do their job and review the proposed merger will weaken Albertsons’ ability to continue business operations and compete.”

The companies that will profit from the merger and from the dividend if it is paid out will do so on the backs of consumers that are already burdened with record cost of living increases.

Consumers are already facing high food price inflation that will only be worsened by the proposed merger and dividend. Food prices skyrocketed by 11.2% from September 2021 to September 2022. Many factors, from supply chain issues to war in Ukraine, have driven record inflation in the past year, but this $4B money grab makes clear that grocery giants are choosing to increase prices to make huge profits. ​ Consumers have seen all aspects of life get more expensive over the past year and the Kroger-Albertsons merger will only make matters worse.

Of the companies set to profit from the merger and dividend, Cerberus Capital Management will see the largest gains with over $5 billion in earnings if the merger is approved and $1 billion from the Albertsons dividend alone. Cerberus, the private equity company that holds 30 percent stake of Albertsons and controls the board, has a history of controversial investment strategies.

Cerberus has invested in a series of military and security contractors that have drawn media scrutiny. In June 2021, The New York Times broke the story that the Saudis who participated in the 2018 killing of the Washington Post journalist Jamal Khashoggi received paramilitary training in the United States the prior year conducted by Tier 1 Group, an Arkansas-based security company owned by Cerberus.

Additionally, during the period that Cerberus owned government contractor Dyncorp – 2010-2020 – the company paid at least $9 million to resolve multiple lawsuits by the US Department of Justice (DOJ) alleging that DynCorp had defrauded the US Government.

Cerberus has been a heavy investor in single family rental homes, buying up homes and converting them to rentals. Cerberus’ FirstKey Homes has invested heavily in majority-Black cities like Memphis, Tennessee and has drawn scrutiny as its homes have faced thousands of code complaints and filed thousands of actions to evict residents, including during the COVID-19 pandemic.

Despite its controversial investments, Cerberus has historically been notoriously media shy. In 2007, Cerberus CEO Stephen Feinberg famously said, “We try to hide religiously. If anyone at Cerberus has his picture in the paper and a picture of his apartment, we will do more than fire that person. We will kill him. The jail sentence will be worth it.”

The Albertsons merger and dividend is another example of Cerberus’ controversial profit strategies.

The proposed dividend would deplete much of Albertsons’ currently available cash. The dividend will be funded with $2.5 billion in cash and $1.5 billion in debt. This is a controversial financial tactic called a dividend recapitalization, where a private equity firm uses debt leveraged onto a company that it owns to extract cash dividends.

This tactic has been widely criticized because Cerberus may be profiting at the expense of consumers. UFCW Local 770, which represents grocery workers at Albertsons stores, said that the dividend will  “devalue the company at a time when consumers are facing crushing inflation.”

Senators Klobuchar, Blumenthal, and Booker wrote to Lina Khan, chair of the Federal Trade Commision, expressing concern regarding the merger and the effects it could have on food prices. Bob Ferguson, the Washington State Attorney General who filed the suit that halted the dividend cited concerns regarding the potential for food prices to rise and the effect on unionized workers.

Accountable.US, an advocacy organization, claims that in response to recent recession concerns “corporations have used inflation, the pandemic and supply chain challenges as an excuse to exaggerate their own costs and then nickel and dime consumers.” The cash that Cerberus is pulling from Albertsons to fund the dividend payout should go to combat food price inflation that has burdened consumers. Albertsons’ cash has nearly doubled to $3.4 billion since February 2021 as consumers have faced an 18% increase in food prices over the same period.

While Cerberus and other Albertsons investors line their pockets, consumers will see store closures and limited competition that may further drive up food prices. Halting the dividend payout is a necessary step in ensuring consumers are not hurt by this merger. The restraining order against the dividend is currently being appealed to Washington State’s Supreme Court and is likely to be paid out unless the court creates a new legal precedent or a law is passed to limit this dangerous practice. 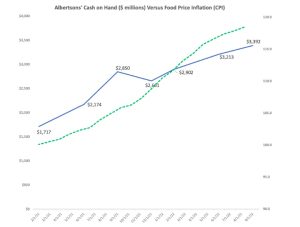