Part 1: Private Equity Fuels LNG at the Expense of Communities and the Climate

What Is LNG and What Role Does It Play in the Global Energy Market?

Liquified natural gas (LNG) is natural gas transformed into a liquid for more efficient storage and shipping, from producing regions to markets. Private equity has played a significant role in enabling the United States to become the world’s largest LNG exporter. Nearly 86% of the operating LNG export terminals in the country have some private equity investment. These private equity-backed terminals export over 8 billion cubic feet of gas for international buyers daily. These polluting LNG terminals rake in profits for private equity firms at the expense of communities and the climate.

It has widely been debunked that natural gas and LNG are clean sources of energy. Natural gas is predominantly methane, a greenhouse gas that is 86 times more damaging than CO2, during its first two decades in the atmosphere, and is responsible for 30 percent of the rise in global temperatures since the industrial revolution. Methane leaks into the atmosphere throughout the natural gas supply chain, making it the second biggest driver of climate change.

LNG is 600 times less voluminous than gaseous natural gas so large volumes can be carried on cargo ships across the world, where it can then be re-gasified and piped to homes and businesses. The U.S. began exporting LNG in 2016 after a 40-year ban on crude oil exports was lifted the year prior. Since then, the U.S. has invested heavily in horizontal drilling (fracking) technologies, pipelines, and LNG export infrastructure, to become the largest exporter in the world, exporting approximately 11 billion cubic feet of LNG per day – equating to 13 percent of the United States’ total annual consumption of natural gas last year.

A significant portion of the U.S.’s LNG export capacity comes primarily from the Gulf Coast region of the country which has been an epicenter of domestic oil and gas production. The LNG industry is supported by hundreds of oil refineries, and petrochemical facilities, as well as pipelines from the robust natural gas extraction in Texas’ Permian Basin. The U.S. Federal Energy Regulatory Commission (FERC) has approved an additional 13 export terminals to be built in the next 5 years, more than doubling the number of these facilities, further concentrating fossil fuel infrastructure and impacts on Gulf Coast communities (Figure 1).

Private equity has fueled the LNG export industry by investing in six of the seven (86%) existing operational export terminals. For example, as of 2020, 42% of the ownership stake in the country’s largest export terminal, Sabine Pass LNG in Louisiana, was provided by an estimated $7 billion deal between private equity firms Brookfield Infrastructure and funds managed by Blackstone Infrastructure. Brookfield Asset Management also co-owns the Cove Point LNG export facility and earlier this year, Blackstone acquired a stake in a LNG export facility in Elba Island, Georgia. KKR has also stepped into the race by acquiring a stake in Sempra Infrastructure Partners, an investor in  the Cameron LNG export facility. Together, these private equity-backed LNG facilities export 8.94 billion cubic feet per day – representing an estimated 80 percent of domestic daily export capacity (see Table 1). 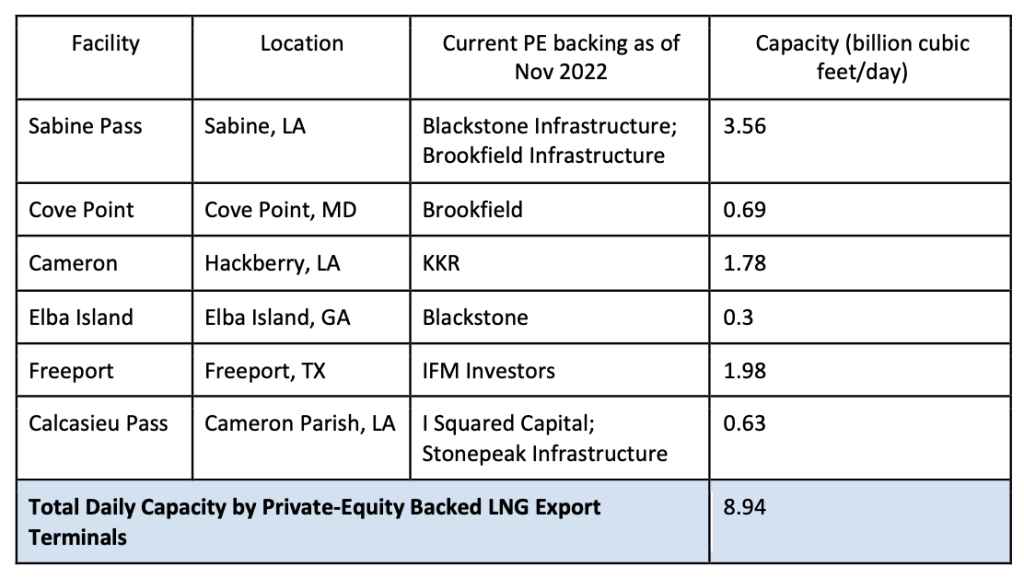 Data Source: Facility capacity information comes from US Energy Information Administration data, last update 8/22/2022.
Note: Not included in the table is the Corpus Christi LNG terminal which was owned by private equity firm EIG Global Energy Partners from 2015 to 2020.

Freeport LNG is the second-largest LNG facility in the U.S. and is partly backed by at least $2.4billion from private equity firm IFM Investors, since 2013. In June of 2022, a fire, and resulting explosion, left the plant offline and increased regulatory scrutiny regarding plant safety. According to the local fire marshal’s report acquired by E&E News, a “pipe was filled with liquefied natural gas and was likely blocked for four days by an improperly closed relief valve, causing pipes to move on their support structure as pressure built up”. Freeport LNG’s managers didn’t stop operations after learning about the blockage because they didn’t want to acknowledge there was a problem in the plant, according to an in-house investigation which was acquired by E&E News through the Texas Public Information Act.

Private equity firms are known for loading portfolio companies up with debt, laying off workers, and bankruptcies. Regarding workers, the Root Cause Failure Analysis published by federal pipeline regulators after the June 2022 fire reports “over 97% of employees at Freeport LNG reported having worked considerable overtime leading up to the incident. That included 20% of employees that said they worked over 130% of their scheduled hours.” An independent investigation into the Freeport fire lists “operator fatigue as a result of significant overtime needs” as a contributing cause of the fire. The plant has been offline since June and likely will not restart until the first quarter of 2023, which has had a negative impact on the company’s debt rating, and poses financial risks to investors.

LNG’s Impacts on the Climate and Investors

Turmoil at LNG terminals such as Freeport, have an impact globally both on the supply and price of natural gas, having removed 20 percent of US LNG exports out of the market and reduced shipments to Europe by 10 percent. According to a report released last month by the U.S. Energy Information Administration, families who heat their homes with natural gas will pay 28 percent more this winter than last year. The impacts of the Freeport LNG fire also affect the local public health and safety of frontline communities who live near the terminal and the environment. The U.S. Pipeline and Hazardous Materials Safety Administration (PHMSA) conducted a preliminary report of the incident and found “continued operation of Freeport’s LNG export facility without corrective measures may pose an integrity risk to public safety, property or the environment”.

Private equity’s investments in LNG are not aligned towards a just energy transition and efforts to mitigate climate change. The development of LNG facilities has been found to be incompatible with pathways to limit global temperature increase to 1.5 degrees Celsius. Private equity firms typically hold companies for three to five years, even though the operating timeline for newly built LNG facilities can be decades long, imposing health risks to neighboring communities, contributing to climate change’s accelerating impacts, and increasing climate-related financial risks for investors.

Investors have an opportunity to engage their private asset managers around these impacts to ensure they limit the financial and climate contagion associated with these investments. Resources such as the Private Equity Climate Risks Scorecard provide frameworks and guidelines to help investors ask the right questions and secure greater transparency and accountability from their managers.