In 2021 and 2022 private equity firms have acquired at least $25 billion of oil and gas assets from the public markets.[1] This is a continuation of a larger trend where oil and gas assets are transferred from public markets into the private markets thereby masking the emissions and their negative effects away from public view. Private equity firm KKR holds the lion’s share of these recent take-private deals, totaling at least $15.8 billion.

As publicly listed oil majors are succumbing to public pressure, they are offloading less productive assets to claim reductions to their carbon footprint. Consequently, private equity firms have become regular buyers, continuing to operate these assets in the less regulated private markets, which are exempted from most financial disclosure requirements. With oil demand forecasted to peak in 2030, continuing to invest in and maintain oil and gas assets increases financial risk for investors. These assets are increasingly more likely to be left orphaned and stranded, potentially leaving it to American taxpayers to pick up the tab for associated decommissioning and cleanup costs.

With the climate crisis intensifying and the need for a just transition to renewable energy becoming more urgent, this public-to-private trend is exacerbating the crisis as fossil fuel assets taken into the private markets tend to be at risk of weaker climate stewardship.

KKR
KKR is one of the largest private equity firms in the world with $496 billion in assets under management as of September 2022, roughly $25.6 billion of which is invested in energy. And while the firm boasts that it is committed to sustainable investing, it continues to invest in dirty and harmful energy assets earning a ‘D’ in the Private Equity Climate Risks Scorecard. 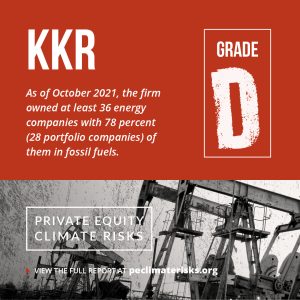 Most notably, since 2018, KKR has remained a majority stakeholder in the high-profile Coastal GasLink Pipeline in Canada. The project continues to face opposition from First Nation’s Wet’suwet’en Hereditary Chiefs due to the pipeline being constructed through unceded Wet’suwet’en land and has escalated to criminal legal action in recent months.

In the past two years, KKR has been particularly active in buying up and investing in several multi-billion dollar oil and gas deals from public markets, resulting in transactions totaling at least $15.8 billion.

According to a 2022 report by the Louisiana Bucket Brigade, since 2019 equipment failure at the Cameron facility has resulted in the release of methane and other harmful gasses such as benzene, a cancer-causing gas known to depress the nervous system. Sempra Infrastructure Partners is also involved in the proposed Port Arthur LNG terminal in Jefferson County, Texas, which the Federal Energy Regulatory Commission has already approved. The project is currently facing legal opposition from the local community who are fighting to ensure regulators lower the permitted emissions allowed for the project.

Natural gas is particularly harmful to the environment as it is predominantly methane, a greenhouse gas that since the industrial revolution, has been responsible for 30 percent of the rise in global emissions. KKR is just one of several private equity firms invested in existing and future planned LNG facilities.

ConocoPhillips sold its Wyoming gas assets to KKR-backed Crescent Energy in 2021, consisting of 446 billion cubic feet of reserves in the Wind River Basin. KKR then doubled down in the natural gas arena by merging its western Canadian gas processing assets into a joint venture with Pembina Pipeline Corp in 2022. The deal included buying up Energy Transfer’s holding in the same region for a deal worth $8.99 billion.  As a result of this deal with KKR, the midstream pipeline operator stated it expects to increase its natural gas processing capacity equal to roughly 16 percent of Western Canada’s total processing capacity, according to Reuters. This is a case where two publicly listed companies shifted assets into the private market.

Big Oil Continues to Offload Upstream Assets to Private Equity Firms
Several other private equity firms continue to snap up sizable upstream oil and gas assets from some of the world’s largest oil companies on the public markets, which are offloading carbon-intensive assets in an attempt to placate public pressure around their overall carbon footprint.

Occidental announced in April 2021 that, as part of the company’s “divestiture and deleveraging goals”, an agreement was reached with Colgate Energy Partners, a company backed by Carlyle’s NGP, to buy approximately 25,000 net acres of drilling land for $508 million from Occidental. The prior year, Occidental sold its onshore drilling assets in Colombia to Carlyle.

Exxon Mobil has also been divesting assets and in August 2022 it reached a deal to sell around 5,000 natural gas wells and related infrastructure in the Fayetteville Shale area of Arkansas to Flywheel Energy, a portfolio company of private equity firm Kayne Anderson. This deal is part of Exxon’s strategy to offload less lucrative assets and will bring Exxon’s total proceeds raised from selling “non-core” oil and gas assets up to $15 billion, according to Offshore-Technology.

Norway-based private equity firm HitecVision has been on an acquisition spree recently, buying up large oil exploration and production assets in Europe from publicly owned oil majors. Though HitecVision states they use their “long history and deep networks in the industry to partner with the traditional oil and gas companies to help accelerate their journey towards a low-carbon future”, in December 2021, the firm bought up over $1 billion of interest in the North Sea and UK oil exploration assets from Exxon. And in 2022, HitecVision landed another $1 billion worth of interest in oil and gas assets from Norwegian state-owned multinational energy company, Equinor.

Even though these assets are being sold into private markets, the harmful emissions associated with their continued use are not going away. They are merely being transferred into the hands of private equity firms with even less accountability.

The Transition to Clean Energy and Stranded Assets
The most recent International Energy Agency report forecasted that demand for fossil fuels will peak in 2030 and Fatih Birol, head of the IEA said, “After rapid growth in gas consumption in the last 10 years, we think the golden age of gas is coming to an end.”  The report also forecasted that as energy companies begin to move into renewable energy, investments in clean energy are expected to rise nearly 50 percent by the end of the decade, doubling current annual fossil fuel investments.

And while many private equity firms are increasingly investing in renewable energy, it is clear they are also continuing to invest in extensive fossil fuel extraction through these recent deals. A report by Carbon Tracker Initiative found Carlyle’s investments in upstream energy are exposing investors to financial risks since they are unlikely to be economically viable as the world shifts towards renewables. Additionally, the Environmental Defense Fund found that a growing number of upstream assets are shifting into traditionally less transparent private markets where owners have fewer climate commitments. 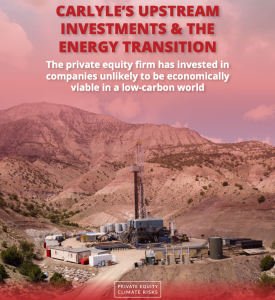 Some of the riskiest and most harmful investments are in oil and gas wells, which several of the recent public-to-private upstream deals include. If the wells are aging and deemed to be not profitable to return them to production, then they need to be safely and properly plugged in order to ensure they will not leak oil and associated harmful environmental pollutants. Industry experts are concerned these sales shift the environmental liability into the hands of less accountable actors increasing the risk of aging wells not being plugged and instead being left orphaned, leaving taxpayers to foot the bill for proper cleanup costs.